Dollar Cost Averaging: What is it and Why to Use it

Most people who invest are dollar cost averaging fans but they don’t even know it. Dollar cost averaging is founded on a simple idea that investors should accumulate investments over long periods of time in very small doses. Anyone who saves for retirement with a 401k does just this – each pay period funds are moved from the worker’s check to their investment accounts.

One who dollar cost averages into the market would simply invest a certain dollar amount in planned “chunks,” regardless of how the market is performing. Over time, they’ll buy low and high, but on average, their buy price will be neither high nor low. It’ll just be average. 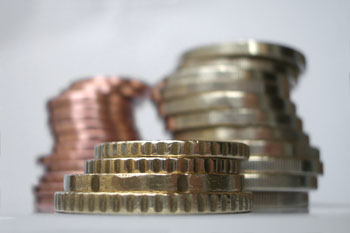 Being a Realistic Investor

Being right about when or how to invest is an attribute that holds no value if you are not realistic about your investment expectations.

The expectation is that over time the stock market will create wealth for the people who invest. Historically, the stock market as measured by the S&P 500 index has returned about 9.8% per year including reinvested dividends.

Here are two relatively recent examples just to show how varied stock prices can be:

Mere months separate these two examples, but stock prices as measured by the S&P 500 index were vastly different. To date, if you had bought at a relative peak in 2008, your returns would be very different from someone who had invested at the bottom in 2009.

By dollar cost averaging, investors can minimize the importance of each individual investment and experience returns that are more consistent with the market averages. This creates an environment in which an investor can make realistic expectations for the future, and form a plan with those reasonable expectations.

Dollar cost averaging works best in a frictionless environment free of transaction costs or commissions. If you pay a commission to invest, consider reducing the number of times you average into the market to reduce the effect of transaction costs. Paying $10 four times per year is much more attractive than paying the same fee every two weeks, for example.