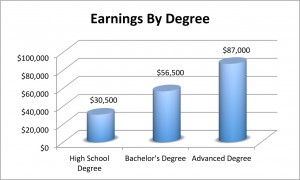 Let me start off by saying that I am all for getting as much of an education as you can. I personally have both a bachelor’s and a master’s degree. But before you decide to go to college or graduate school, you should know a few things first. These things include the employment prospects of what you plan on majoring in and what you can expect to earn both starting out and once you are tenured.

This leads us back to the chart above. Look again at the advanced degree earnings of $87,000. You might come to the conclusion that once you get the degree, you’ll be making that amount of money. In most cases, you won’t. The number in the chart is for those aged 25 and older, so it takes into account those who just earned their advanced degrees as well as those who have been working for 10, 15, even 20 years. This skews the numbers.

When thinking about your career, you need to understand the pay scale for it. If earnings for the job are on the lower end, you need to be conscious of the debt you go into while in school. We have heard of the horror stories in the news about recent grads that have $100,000 in debt and are working at Burger King because they cannot find a job. While there are many in this situation, it is more the exception than the norm.

Since the average student graduates college with $24,000 in debt, I would say that going to college is a good investment. Even when factoring in the amount of money paid to attend (on top of the student loan debt) and the lost wages while attending. Over the long run, it makes sense to continue your education after high school.

But the argument depends on what degree you are going to receive and what type of job you plan on working. If you are planning on majoring in a field of study that sees the average worker earning $30,000 per year, going into large amounts of debt for the degree probably isn’t worth it.

Earning an advanced degree that translates to a job in a high paying industry, however, is a good career move that should be explored. The Master of Business Administration degree, for example, can lead to jobs as a financial analyst, marketing manager, operations manager, or project manager. The average annual salaries of these positions range from roughly $60,000 to $92,000 per year, which makes earning the MBA degree a solid bet in terms of risk versus reward. Over the years, those with this advanced degree can even work their way up to become the chief financial officer of a company, which brings a six-figure salary, on average.

The point is to understand how the average earnings are determined for your career with a certain degree. If it’s an average, remember: you may make more or you may make less. You have to weigh all factors beforehand so that you aren’t stuck behind the eight-ball when all is said and done.