Everyone has financial milestones in their life. Whether it’s moving into your first apartment, getting your first job, buying your own car, or something else. While some of the mile markers may not be that significant in the big picture, they sure mean a lot in the day-to-day. My wife and I just past another financial milestone. 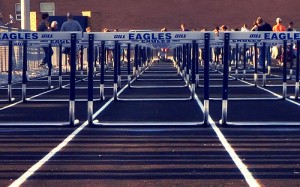 A couple weeks ago, I gave an update on my goals from last October. In that update, I mentioned that we were close to paying off my wife’s graduate school. Well, now it’s official. We sent in the last payment for her graduate degree. She will graduate in December and while that will be a great moment, I might be a little more excited about how much more we can save now that we don’t have to fork out big money towards school. In fact, I’m already calculating how much more we can put towards our house down payment.

The Challenge(s) of Paying for Graduate School in Cash

While it may be hard to pay for an undergraduate degree, it’s seems just as hard to pay for graduate school. Luckily for us, my wife has been able to balance working full-time and going to school part-time. (I say balance, she might use a different word, like “suffer”) This has been quite the challenge – for both of us. Sure, she is the one with deadlines, papers to write, books to read, but it also takes a toll on me too. It often means I take on a larger share of the household chores so she has time to do it all.

We make a pretty good team, but it’s never easy – especially not financially. For the past two years, we’ve paid out several thousand dollars every 3-4 months. And as I’ve mentioned before, we did it without taking out a loan. It was not only financially difficult to make ends meet, but it was emotionally draining as well. It’s hard to see money that you work so hard for disappear in a matter of minutes. But, we did it.

In a manner of speaking, student loans are not in our DNA. We’ve never had debt for school, and we never will (knock on wood). We’ve dodged another bullet. While many of my friends “paid” their way through grad school with federal loans (and will continue to pay for the next decade), we worked really hard to come up with the money. It wasn’t easy, but now we have more freedom going forward and a bright future for Mrs. 20s. A future without student loan payments…

Why Pay So Much for a Graduate Degree

My wife and I now both work in the nonprofit sector. We do different jobs, but we’re both at a manager level earning close to the same money. While I almost completed my degree in an unrelated field, in four months my wife will have a graduate degree and I won’t. I often joke with her that I learn the same things just from doing them in my job that she is learning in her classroom. She reads about nonprofit budgeting, and I experience it.

Part of is due to the different size of our employers. Hers has several hundred employees. Mine has seven. There’s a big difference and a big part of the reason why I have been given so much responsibility. While I know that there’s a huge benefit in her completing her degree, it doesn’t mean that it’s easy to pay so much money or devote so much time just to get a piece of paper. With the amount of knowledge that you can learn through experience, or better yet, the internet, I can’t help but ask myself the following question:

If I can learn the same thing without paying tens of thousands of dollars, why do it?

Despite how often or frequent I ask myself this question, I do know that it is worth it. We decided to get her degree because of the huge potential for growth that it offers, among many other reasons. It’s easy to see how important it is when everyone above her at her large organization has the same degree that she is working towards (or business equivalent). While she won’t be guaranteed a promotion at the end of her program, options are endless. Sidenote: I’m excited to track the return on this investment – because that is what it is, an investment.

Issuing the last payment for her graduate program isn’t just about the money we can now save – although that is really nice. Instead, it’s an indication of what is to come. Potential room for expedited advancement in her career. More free time. More respect from colleagues. The ability to request people use “Master” as her salutation. Okay, maybe not the last one, but you get my point. This is an exciting time for Mrs. 20s and while it’s not over yet, we can definitely see the light at the end of the tunnel. While I have dedicated this whole post to bragging about ourselves, the truth is that I couldn’t be more proud of her and how much she has given up to get this degree.

This is my way of saying, “I’m rooting for Mrs. 20s” as she completes her degree and we prepare to move on past identifying ourselves as students.