How to Get Raise

It’s no secret to many of you that I am loving my new job. I’ve written about it time after time in the past nine months. Those who know me well should know by now that while I can handle multiple things at once, I tend to focus my (extra) attention on one thing at a time. Three years ago, I got on a health kick and decided to run my first 5k ever. Eight weeks after starting training, I ran my first 5k at a pace of 8:30 min/mile. Not too shabby if I say so myself. Two years ago, I started this blog and would get up over an hour earlier than I was required to so that I could make this blog a success – and it worked. I’ve since turned back the dial of attention when it comes to this blog and focused on other things: right now, my job.

In other words, if you read this blog regularly, you will know that my career has been a huge focus in my life just based off the frequency with which I talk about my new job. Odds are that I will eventually shift my focus and perhaps entertain you with more interesting posts, but for the time being, you’re stuck with me ranting about my career – mostly because it helps me process them, but also out of a hope that I can help you as well.

The Difficulty in Getting a Raise

While I have thoroughly enjoyed my new job the past ten months, I am not completely done working hard to improve my situation. It’s a vast improvement from my old position, but there is much more potential within me. One small aspect of that is financial compensation – and this is no exception. I, like most people, want to earn more money in the future than I’m currently making now. While most of us don’t like to talk about earnings, I expect most of us feel the same way.

I grew up understanding that companies gave out annual raises based purely on performance. Every year, I knew that my dad went through an evaluation period and was given a % increase in pay based on his performance. As a child, I understood a pay increase as an automatic response from an employer after doing your job well. Unfortunately, the reality that I once knew has faded.

It was just last year that I was working for a different employer who was going through a hiring freeze, with no pay increases. In fact, I even suffered a small pay decrease. It wasn’t the reason I started looking for work elsewhere, but it contributed to it. The reality that I experienced is that you can work really hard, but at the end of the day, poor decisions made by other employees can affect your own compensation. It doesn’t seem right, but that’s the way it is – or seems to be from my experience. My work experience tells me that a raise isn’t guaranteed, no matter how well you perform. The current economic struggles clarify the importance of being strategic about getting a raise. It’s my belief that it’s no longer how hard you work, but how smart. Okay, I’ll admit, it’s not exactly an original thought and some may even see through my effort to disguise a popular cliche (work smart, not hard), but the fact remains: if you want to get a raise, you have to realize it’s not just about doing your job. You have to do more than that. 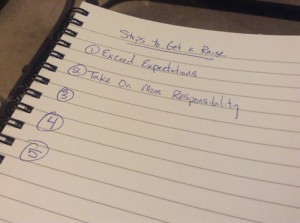 Ironically enough, when I wrote this out the first time, I accidentally titled it, “How to Get a Promotion.”

How to Get a Raise

If you want to earn more money, there are a number of things you should do. I’m in that boat of aspiring to make more money, and here’s a few things that I am doing to get me there.

It’s one thing to do your job well, but it’s another to continue to impress your supervisor. I’ve learned in my few years of professional experience that those who simply meet expectations don’t go anywhere. Those who go above and beyond are the ones who are considered for promotions, make something of themselves, and ultimately (for our focus in this post) earn more money. You may be congratulated for doing your job well and given a small annual raise, but it’s most likely the case that your employer is just trying to pay you enough so that they don’t have to worry about replacing you. Odds are that they are not thinking about how you would be a great fit for a higher-level position or salary. I have been striving to do just that.

While supervisors are willing to hear that you are overwhelmed or need help prioritizing things, it looks better for you if you take on more responsibility. There’s no greater indication to a supervisor that you deserve a raise or promotion, than already succeeding at performing tasks at the next level. While I was never strategically asking for more responsibility out of the selfish reason of getting a raise, over the past three months, I continue to get new responsibilities that should qualify me for a raise when it comes time to re-evaluate the budget.

While it’s no secret that working hard and earning more trust with your employer are key ingredients to getting a raise, I would bet that this third tip often gets overlooked. It’s one thing to do something well, it’s another to make sure it is noticed. There are good ways and bad ways of making this happen. Whatever you do, don’t make it all about you and especially not to your co-workers. The last thing you want to do is isolate yourself from your fellow employees by bragging about yourself. However, when it comes time for your annual review, don’t hesitate to come prepared with a list of your accomplishments. That’s what I hope to do. In fact, I regularly use a task manager on my i-pad so that I can track 90% of my tasks. These include everything from small tasks to big projects. I can go back and see which projects I have completed in the past year at any point, and it’s very easy to see the tangible results of my employment.

That’s my plan for getting a raise. While I’ve had a fairly successful short career thus far, I know I’m not anywhere near being the most experienced employee. I’d love to hear what you would do or have done to get a raise.

What have you done or would you do to get a raise?