How Your Starting Salary Affects Your Career Earnings

It was written in a previous post why you need to negotiate your first job out of college. The reasons given were great, but I wanted to touch on just how much of a difference a higher salary can have on your finances in the long run.

Let’s take two job seekers, Sally and Jane. Both are lucky and get offered jobs at a firm that starts them off at $35,000 per year. Sally is happy to have landed a job and can’t wait to start. Jane, while also being happy, thinks she should receive a higher starting salary. She counter-offers, negotiates and settles for a starting salary of $40,000 per year.

You may be thinking, “big deal, $5,000 isn’t that much money”, but in fact over the long run, it is. I’m not talking about investing the money in the stock market and watching it grow, but rather what happens to that $5,000 as it compounds upon itself over the years when you get raises at work.

What you need to understand is this: the starting difference between the two salaries is only $5,000. But all future raises are based on that initial $5,000. That initial $5,000 is going to turn into a lot of money as your career progresses.

For sake of simplicity, let’s look at the salary Sally and Jane will be earning in 30 years. For this example we will assume they both stay in the same role, and both receive a 3% raise each year. In 30 years, Sally will be earning almost $85,000. Meanwhile, Jane will be earning a little more than $97,000. That is a difference of roughly $12,000! Remember, this difference is PER YEAR. So every year, Jane is earning more and more than Sally. The difference begins as just $5,000 but over time increases to $12,000. Over the course of these 30 years, Jane earned $250,000 more than Sally. We haven’t even factored in the growth if we invested this money yet! 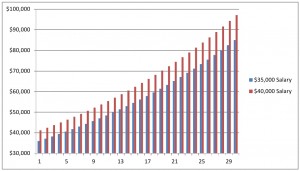 Of course in real life there are variables. There is no guarantee that both workers will always receive the same raise; one might get a promotion; there are ranges for how much you can earn for a given job, etc. All are perfectly valid points. The idea though is to show you how big of a difference a small amount of money can have on your future finances.

Please don’t take this as me saying you should find the highest paying job. I’m not. I am saying to get the most money for the job you want to do and that involves negotiating. I have never heard of someone getting a job offer, trying to negotiate, and then being told the company has changed their mind. You are expected to negotiate. It’s important that you do.

When you receive your job offer, be prepared to come back with a counter-offer. You will have to do a little research to find out the pay range for your job, but that can be found online. If you find the pay scale goes much higher than your offer, don’t counter with the highest figure. Be reasonable. Ask for $5,000 more and be willing to meet in the middle for $2,500 more. Whatever you can get will put you that much further ahead in the future.