How We Are Planning to Save MORE Money

by Corey | how to save money, Manage Your Finances | 17 comments

A few months ago, I wrote a very informational piece on how people can save money. It’s a rather simple topic in the abstract, but when you go to apply it to yourself, it’s hard to make a big change. It’s hard to find lots of extra money in your budget after you have been spending money the way that you do for a while. Simple put, habits are hard to break.

Yet, every once in a while you will find inspiration to take a second look at your budget with an open heart. That’s what’s has happened to me recently. I’m motivated to save more money so that I can direct my spending how I want to (instead of being a slave to my money). My wife and I just talked about ways we can save more money, and I am really excited to share them with you. But first, the motivation behind the change.

Why We Are Making Changes to Our Budget

In the next two to three months, we will be moving to Boston. Not just on the outskirts of boston (but not downtown either), but close enough to where our cost of housing will drastically increase. I’ve come to accept the increase in housing because I know it is where we want to live and likely to decrease our transportation costs. This is just one of the many changes coming up in our lives. To avoid ruining another couple of surprises that I plan to announce later, let’s just say that we have two other changes that will add a little more to our monthly nut – or add more expenses to our regular spending, for those who don’t speak financial nerd.

These kind of changes don’t go over well for a family that is trying to save money for a down payment for their very first home. This isn’t any down payment – it’s 20% in an expensive area. That kind of cash doesn’t just happen on its own. You MAKE it happen by sacrificing, working hard, and keeping focused. That’s what initiated this second look at our budget. I realized that if we don’t make any changes, it may mean delaying our home ownership goal another year or two. We’re already looking at 1-2 years from now. I can’t fathom waiting 3-4 years! (That sounded worse before I actually typed it out, but go with me on this one…)

Ten Steps We Are Going to Take to Save MORE Money

Saving a lot more money isn’t going to be easy. It’s not going to happen over night, and it’s going to take a lot of gut-checking over the next two years. We may modify this plan as things continue, but here’s what we came up with – in no particular order.

1 – Spend Less Money on Eating Out

Somewhere after finding some financial security, we slacked on this aspect of our budget. Part of it was our intentional goal of increasing our social life by eating out more often – or that’s what we told ourselves – and the other part was just being lazy. We probably eat out once a week now-a-days. That’s unacceptable!

Now, we are going to limit our dining out to twice a month AND only eat out at places where it is less than $15 per person for the entire bill – unless it’s a special occasion. To give us some cushion, we’re now budgeting $80 per month for eating out. This seems manageable.

Every couple of months we would splurge a little – and yes, I really mean a little. Last month we finally (after 1-2 years of no clothes shopping) both about $250 worth clothes. Mrs. 20s will be working in an office when we move to Boston (one located outside of our home) and that means she needed a few more work clothes. Because she was also in school, we would also buy text books and so forth. Before you know it, we would spend a few hundred dollars each month on random stuff. This can’t happen any more. We’ll be paying for a few things related to the move, but other than that, almost nothing when it comes to non-essentials. 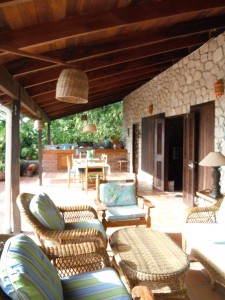 Say goodbye to our week-long vacations like our trip in 2011 when we visited this nice place.

Another item, which shouldn’t be too hard, is going to be to travel less frequently. We’ve traveled a lot this past year, and while most of it has been for work, we have made a few trips for pleasure. This costs money and unfortunately, it’s something that is going to take a backseat for a couple years. We’ll still prioritize seeing family and some close friends, but other than that, we’ll be staying close to home.

Every year, my wife and I take a nice anniversary trip. We usually alternate between domestic and international trips, but somehow end up spending somewhere between $1500 and $2500 for a week’s worth of vacationing. This is something we’ve always prioritized – and we’re still going to – but the next year or two is going to mean us being more frugal in this category. Vacations are nice and necessary, but this time we’ll look to do something more affordable. Since our anniversary was in July, this shouldn’t even be an issue for another six months when we would normally start planning our next trip. I’m pretty sure we’ll succeed with this one.

Over the past months I have been slacking a little – and it’s showed on my online revenue. That just can’t happen anymore if we want to achieve some of our financial goals. I used to come close to my day job earnings – that was before I switched jobs and when I was earning less at the nine-to-five. Now, I barely break even. It’s time to ramp this up once again. I’m starting to focus on content again so I can increase my traffic, but I’ll soon start to focus on some revenue-producing content. We’ll see how it pans out. Even if I make a couple hundred more per month, that’s a few thousand dollars more for the year.

6 – Switch to a One Car Family

With the move coming up, we can finally sell that stupid second car. We skimped on the second car, in an effort to keep more money invested and use less of our savings, but the only thing it did was force me to worry when it’s going to break down. It’s likely that I am just being paranoid, but you never know. It just needs to make it another month or two before I can put it for sale. The proceeds of the car will go towards paying for our move and we’ll continue to save money over the rest of our lives on the lack of maintenance, lack of car insurance (for a second car), and lack of gas. I can’t wait! I still can’t believe how delusional I was when it came to dreaming about a second car – but I guess the 15 degree days can do that to a person. This step should be achieved by December.

My annual review is coming up in December, and I’m hoping for a decent raise. I talked to my manager at my initial 6 month review about a raise and the stage is set for getting a raise. I don’t want to share too many specifics just yet, but you have to know by now that I’m doing everything to make this raise a reality. 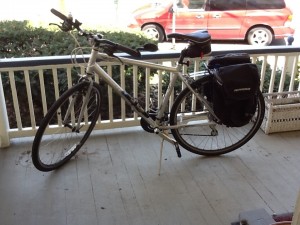 This won’t happen until the spring, but with living closer to my office (in Boston), and literally living next door to a bike-commuting park, I should be able to bike the 3 miles to work 6 months out of the year. I’ll be able to work from home some days, which will increase the odds of me sticking to this plan. Either way, I’ll either be biking or taking public transportation (along with Mrs. 20s). This means that our main car will be unused 4-5 days out of the week – just the way I like it. This will not only prolong the length of this car, but also cost us less in maintenance. I may even be able to find less expensive car insurance. Wahoo!

9 – Cut Back on Groceries

I could have lumped this in with eating out less, but it’s a different step in my mind. We’ve been spending somewhere around $600 in groceries each month and that really should be somewhere around $450. It’s a little unacceptable. We’re going to cut out all drinks except Orange Juice (to keep us healthy – gotta love that Vitamin C), buy less  special cereal, and limit the number of snack foods that we buy. This should reduce our weekly grocery bill by over $10 and should get us to where we want to be. I’m hoping that between groceries, Costco (bulk foods), and dining out, we can spend less than $600 per month. I’ll be sure to give you regular updates on how we are doing with this one – because it will probably be a challenge.

I don’t like to put timelines on all of these, but my mind can’t help but wonder when this will happen. There’s no pressure on Mrs. 20s to perform or anything – *cough* make more money *cough* (just kidding), but I do expect her to get a pay increase in the next year. Probably in the Spring or summer. In all seriousness, she will finish her graduate program in December, which will naturally make her more attractive to her employer (and others) and she’s already a top-performer at her job. I don’t see her going too much longer without a promotion or raise. If/When she does get a raise, it will be considered extra. We’re not counting on it, but it will help us save that much more money each month.

So, that’s it. When looking at these 10 items, here’s an abreviated look at what we are hoping to do:

The thing I like about writing down actionable steps is that it makes it seem that much more achievable. When you look at the summary, you realize how many habits we are looking to change at once. It’s not going to be easy, but that’s what taking control of your money is all about.

Readers, are you making any changes to your spending? What tips can you share to help others break their bad spending habits?