Improve Finances by Giving Away Stuff (for Free)?

by Corey | how to save money, Manage Your Finances | 1 comment

Over the past few months, as my wife and I adjust to living in Boston, there has been a recurring thought. Since moving several hundred miles from where we used to call home, my wife and I have realized that we have a lot of stuff. Too much stuff.

I have come to realize that I can be a pack rat. I like owning items. If someone were to ask me if it would be better to buy something or to experience something, I would answer “experience,” but only because that is what you are supposed to say. The truth is that I like to hold on to things. 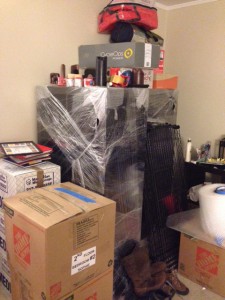 It may sound cliché, but my rationalize goes something like this: “You never know when we could use it…”

I’m sure that’s what all the hoarders tell themselves, but part of my reasoning falls in the logic that I don’t want to re-buy something later. For example, I may have some t-shirts that I don’t wear that often anymore, but I hesitate to get rid of them because I would it MIGHT mean that I would need to buy more shirts later.

It may sounds like I’m trying to justify my addiction, but it’s the truth.

My frugality drives me to hoard stuff.

But, that’s about to change. As I mentioned, I have slowly been coming to grips with the reality that we have TOO much stuff. Stuff that we don’t need or use. Part of this came from moving; when you exert energy to bring an item from one place to another, you really begin to evaluate if it is necessary to keep. By getting rid of it, I estimate a savings of at least 60% come moving day. The other part is just me being contemplative.

In fact, I have a new theory about possessions that I want to run by all of you.

Ready for my Crazy Idea about Extra Stuff?

As I mentioned, part of why I keep so much stuff is because I’m afraid it will cost me more money to get rid of it because I may need to replace it later. To lay it out clearly, here’s the logic:

That more or less explains my rationale. However, any objective observer can see the fault in my logic. If I haven’t an item in over a year, I don’t need it now and most likely don’t need it EVER in the future. Instead, I am letting fear of a future purchase control my habits.

This is not good. In order to fix this, change my lifestyle and get rid of unnecessary items, I need to convince myself to follow a different logic. Here’s where the crazy idea comes into place.

What IF it’s actually better financially to get rid of stuff (for free)?

Many people often use getting rid of stuff as a way to obtain a little bit of cash. They coin it ways to earn money, but really it’s recouping some of your loss (since you likely paid more money upfront than what you sold it for as a used item). I do this. In fact, I just did this. After Mrs. 20s and I moved to Boston and into an apartment with central air, we no longer needed our window AC units. We just listed them and sold them for about 1/2 of what we paid for them 3 years ago. I probably could have started higher and recovered 60-70% of retail price, but I wasn’t sure, and I knew I could sell them for about 50%.

But, selling your crap is NOT what I’m talking about.

What I’m talking about is giving away stuff for free.

“How can giving away stuff for free better financially?” That’s losing money!

Well, I’m glad you asked. While it may not sound logical, I have a theory that getting rid of your unnecessary items is actually financially better for you than keeping it (to avoid a re-purchase in the future). Here’s why:

In other words, to summarize my new theory (which many others are probably screaming, “DUH!”), it goes something like this:

While it may seem illogical to get rid of stuff without trying to sell it, instead it actually helps your finances. It allows you to quickly change your lifestyle from hoarder, understand the benefits of simplicity, and start spending your money where it’s really important to YOU – not where society tells you to spend it.

Putting My Theory to Practice

Sounds like a great theory – makes sense, right? Well, time to put it to the test. Over the next several months, I am going to start getting rid of stuff – stuff that I would normally cling to. It’s not going to be easy, but I’m going to do it.

I’ll update you all along the way, but I’m hopeful that by getting rid of unnecessary items, it will not only simplify my life, but bring more happiness and ultimately boost my finances.

Readers, want to join me? Comment about things you need to get rid of and GO do it.