How We Spent (and are Spending) Our Extra Money

In my mind, there are two groups of college graduates. There is the small group of graduates who graduate with a practical degree that land a high-salary job from the beginning. They deserve all the props they can get because this quite the challenge. The other group of graduates are those who struggle finding a job. Perhaps they pursued a liberal arts degree, like my wife and I, and graduated college without any strong direction on what they wanted to do. Without a directly-related 4-year degree and with little to no professional job experience, it is almost impossible to get a high paying job.

Our Struggle to Earn Money After College

This isn’t just any generalization. This was a fact of life for us. After graduating, we sacrificed all hopes for a decent paying job in order to move to another country. This was our rationale: not very many college students graduate debt free and we want our lives to be doing something meaningful. That’s why in January before graduation, we decided to move to Nicaragua to teach English and be a part of a “diversity appreciation movement” (there was no official name, but that describes the purpose of our moving in a few words). This ended up badly for us. After getting sick 2-3 times each with the first 6 weeks due to the unsanitary conditions that we were provided, we were forced to pack our bags and return home.

Not only did we feel like we had failed in so many ways, but we also created a 4 month gap of work history that no one would understand. Please understand that this was not a concern for us then or ever, but for the purposes of this post, that’s what it did in the eyes of our future employers. If you are trying to obtain your first job, the last thing you need is to explain why you haven’t had a “real” job.

We ended up moving to New Jersey a month after returning to the US (it took that long to recover from our illnesses and weight loss; we both lost 20 pounds in 6 weeks). I wanted to go to grad school and since we didn’t have any other convictions or ties, we packed our bags. We signed our new expensive lease with no guarantee of a job. In scrambling, we were both able to secure jobs, but they were far from what we wanted to do. I worked 30 hours while going to school and my wife worked 50-60 hours. We paid our bills, but had little left over.

This continued on for a year, when my wife realized she couldn’t work the job that she was working. She already wrote about the experience of a street canvasser, if you are interested. She ended up making decent money, but she needed a career change. I had just got a promotion to full-time, making just a tiny bit more than before and now had benefits. She left her job for an Americorps position that paid her well-below minimum wage. In fact, her living stipend was less than my tuition each year, so we were practically living off my low-paying salary. 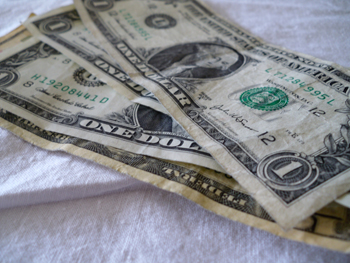 It’s a Great Moment When You Finally Earn Extra Money

Those two years were a challenge and yet, not that far away. Because my wife is extremely successful and motivated, that year as an Americorps vista positioned herself into getting a Manager position at the same company. She nearly quadrupled her income from one year to the next. Since we were living in the black and not going into debt when we had low-paying jobs, this meant her pay increase was “extra money.” While there are days in my life that are more exciting in my life (like my wedding day, graduation from college, getting my first real job, etc.), this is up there with the others. Only those who struggled after college know what a true relief it is to finally have some breathing room in your budget.

Most young adults, when tempted with extra money, decide to inflate their lifestyle, buying a new car or taking an expensive vacation. I instead, asked all of my earlier readers what I should do with the extra money. I got a lot of great advice from my readers. I’ve given a few updates since that time a year and a half ago, but I thought I would provide a nice little summary for all of my readers who have joined me since writing that first post.

What We Did (and are doing) with Extra Money

There are many things that we did with the extra money. Here’s the list of important changes:

While I’m not proud of this, I’m also not ashamed of it. My wife and I had made huge sacrifices so that I could pursue my educational goals. We were living in one of the most expensive regions in the country, paying more in rent for our 1 bedroom apartment than my family members elsewhere were paying for the 3 or 4 bedroom mortgage. In our “no-money days,” we never went out to eat, rarely went to the movies, and took a short 3 day vacation for our anniversary. After getting more money, we decided to change a few things. We would go out to eat 2x a month, allow ourselves to have a little fun, and a few other small improvements. We kept the same faithful wagon that we bought years before then. We also changed apartments, spending a few hundred dollars more each month on rent, but it was a vast improvement from our old apartment. Now we feel like we can breathe.

As hinted at in my original post, one of my goals at the time was to open and fully fund a Roth IRA. I can tell you now that we did accomplish this. We had already been contributing to my wife’s Roth IRA (it was our only retirement plan the first year or two), but it was time to kick it up a notch. $5,000 a year in contributions is not going to be enough for retirement, and we knew that. We opened up a Roth IRA for me just months after she got a raise and since then, we’ve maxed it out two years in a row. It will be 3 years soon enough, once we move save up and send off our 2013 for our Roth IRA’s. In looking back at this decision, I couldn’t be happier because we have now saved up a decent amount of retirement savings. Granted, we’re still a long ways from being able to retire, but we have an early start. We all know that it’s important to start early with retirement savings.

Another thing that was important to me was to secure life insurance for myself. My wife’s parents had already secured life insurance for her since she was a child, and now it was my turn to make sure she was covered financially if something ever happened to me. Some may argue that young adults don’t need life insurance because it’s the period that they are most unlikely to die. I couldn’t disagree more.

I decided to go with Whole Life Insurance for reasons that I listed in the other post. Not only does it provide me with a guaranteed $80,000 death benefit for my wife, but it also provides me with a little diversification. It has a cash-value aspect to it that will likely provide me with 1-2 years of retirement income (essentially tax-free) on top of the death benefit. Another benefit of locking in the premium now is that I secured a lower premium since I’m extremely healthy than I will be able to in 10 or 15 years from now.

My wife and I started investing any and all other money that we had sitting around. It was a scary moment to put our money at risk, but it got (and continues to get) much easier as time goes on. We understand that investing and obtaining a decent return on our money is the secret to financial independence. We have high hopes of being financially independent at an early age, while continuing to work for companies that we believe are making a difference.

Most people sell out, get a 6-figure salary doing something that they hate so they can retire early. What they don’t realize is that they are wasting many years of their life for a few extra dollars. My wife and I plan to do it differently. We both work for non-profits now, so a 6-figure income for either of us is unlikely, and impossible in the next few years. Instead, we realize that if we save a large portion of our income (while giving some of it to great causes), we can have the ability to retire early without selling our souls.

While we weren’t perfect when it came to prioritizing the extra money that we started earning, I honestly felt like we did a pretty good job. I don’t know very many other young adults who would prefer to have one car, eat in instead of going out, and many other sacrifices so that they can save for the future.

Readers, do you remember the first time you had a decent surplus of income? What did you do with the money?

Is there anything I am missing?