How to Kick Unemployment’s Butt!

Two and a half months ago, my wife left her job for reasons that I can’t discuss. Regardless of the reason, she was left without an offer from another company. It was what led me to write the post titled, “Emergency Funds Exist for a Reason.” It was my way of trying to stay positive amidst a really crappy situation.

And it really is a crappy situation.

Nine months ago, my wife and I packed up everything so that she could move for her job. While her previous employer had previously allowed her to work remotely while she finished her grad school, it was clear that if she wanted to advance within the company, she would need to relocate. We were both fine with that because (1) we liked the idea of living in Boston and (2) I got a job that would allow me to relocate to Boston. Talk about the perfect situation. It seemed like a dream come true for both of us to have a job in the new city.

It would have been perfect if it were not for the current situation. At the end of June, she parted ways with her former employer and we were left wondering how we were going to pay the bills. She was officially unemployed, less than seven months after moving.

Lots of questions began to flow through my head…. If I’m honest with myself, some of the first moments were ones filled with sadness when I realized that my hopes of buying a home were most likely gone, but the real question started to appear amidst the confusion: How are we going to survive on one income in one of the most expensive areas of the country?

How Do You Survive Unemployment?

While it seemed like a huge obstacle at first, reality has finally set in just months later, and I now know that we will not only survive, but thrive. And that’s because we’ve made decisions in our past that are helping us through this tough time. If you or someone you care about is facing unemployment, here’s what is working to our advantage: 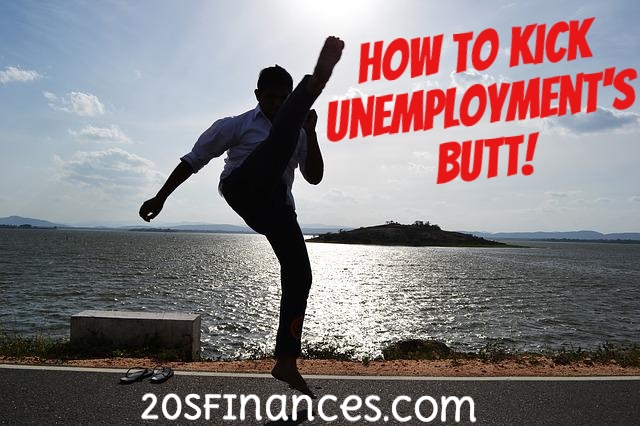 As I mentioned before, our emergency fund is large. Part of the reason we have extra cash sitting around is our intent to buy a home soon. We’re saving up our down payment the traditional way (by working, spending less, and saving the difference) and luckily we’re about a year into that process. As a result, we have a large cushion to protect us. Luckily, we haven’t had to dip into our emergency fund, and that’s because of the other things we have going for us.

When my wife became unemployed, we did not panic as much as other friends of ours would. The reason? Because I still had and still have a stable job. Having two salaries affords you this piece of mind. I took it for granted when we were both working and throwing lots of money towards our down payment – but it really is a luxury. While I don’t have the highest salary, I can pay for most of our expenses with my paycheck. It also means that I was able to sign up for health insurance through my employer, thereby saving us from having to pay for Cobra while my wife finds a new job.

While every family is not able to have dual incomes, there’s no greater safety net.

Another thing that we have going for us is our side income. Because I have been blogging for over three years, I am earning a little money from my online efforts. It’s not a lot, but enough to cover a portion of our normal expenses. Between this and my day job, it covers almost all of our mandatory expenses. While there are days when I just want to relax after returning from my day job, I am glad that I have stuck with it. Now that I have been earning a little extra money from my online efforts, I can’t imagine life without it – especially not now when we need it the most.

Fortunately, my wife was hired as a contractor not long after she walked away from her previous employer. Contract work is difficult – and apparently, becoming more of the norm when small companies hire new employees. It’s difficult because it pays the bills, but offers no job security and increases your tax burden. We’ve already experienced the job insecurity, as her contract has already expired. Mrs 20s is still working part-time for the new company as a contractor, but it’s no longer full-time.

Between this part-time work and our other sources of revenue, we’re actually able to save a little money. Who thought I would be writing a post about not only how to survive, but thrive in unemployment. That’s right – we’re kicking unemployment’s butt!

Last, but certainly not least, I’m now optimistic for our future, not only because we still have a positive cash flow, but also because her job prospects are strong. Mrs. 20s just completed graduate school last year, she has five years of relevant experience, and glowing recommendations. She’s already interviewed for three jobs and is a finalist for one company. On paper, and in many other ways, she’s not only employable, but very attractive to employers.

If you find yourself unemployed and are looking to get hired, you might need to consider going back to school. Luckily for us, we already went through that process, so she’s ready for the next big opportunity.

While it’s clear that you can’t prepare for everything, there are a lot of things that you can control. Don’t let a simple change in job status affect your financial future – take steps now to prepare and join the movement of young adults kicking unemployment’s butt!