Youngest Child? It Can Help You Financially

by Corey | Manage Your Finances | 5 comments

I grew up the youngest child of three brothers. It wasn’t always easy. We had our disagreements and there were a number of instances of being picked on, but more than anything else, it was always an instance of not being able to do the things that my older brothers were doing at the time. Baby-sitting and other odd jobs that allowed them to earn money and buy cool stuff? Nope, not old enough. Getting your own car and driving by yourself to visit friends? Not yet – when you turn 16. Wait and wait some more was a big part of my childhood. In many ways, it has formed me into the person that I am.

As difficult as my childhood may or may not have been, as I reflect on it now, I realize that is helped more than anything. It’s impossible to know whether I would be better off as the oldest child versus being the youngest (because there are too many factors in play), but it is pretty easy to look back on what happened and draw a simple conclusion. In other words, this isn’t a post about whether it’s better to be the oldest child or youngest; it’s just stating the facts on how my situation helped me financially. 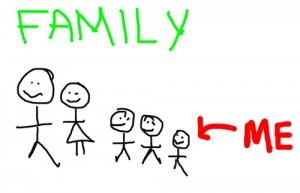 My digital drawing skills for your admiration (or mockery)

If not already obvious, one of the first things that I was forced to learn is patience. It’s hard to be a child and see those closest to you with different freedoms. Learning patience was sink of swim for me. I didn’t have another choice. Patience, in terms of personal finance, is often coined ‘Delayed Gratification’. While it was difficult to see my brothers driving their own cars, earning cash, and many other things, I can confirm that there was nothing sweeter than the feeling doing that myself only years later. While I didn’t realize it at a time, I learned the importance of turning down immediate benefits for a larger future reward. Learning this lesson at an early age will give anyone an advantage.

The other end of having to wait in order to do certain things as a child is being motivated to prove yourself. It’s just like a player sitting on the bench, waiting for the coach to call him in to play. There’s no one more motivated to prove oneself than someone watching from the sidelines. This is what it was like for me. There weren’t any unfair expectations put on me from anyone, but I did work really hard to succeed. Another way of putting this reason why being the youngest helped me is that I always wanted to grow up faster than everyone else. When others shied away from responsibility, I embraced it with open arms. Evidence of this can be found in going to college for the first year with with enough college credits that I was technically a sophomore due to my participation in Dual Enrollment (taking college classes while in high school). Many of my high school friends were out partying on the weekends, while I was working 28 hours a week (the maximum allowed while in high school). I may have missed out on some things in my childhood because of this, but I’d say that I received more than I lost.

Reason # 3 – Learn From Others’ Mistakes

Last, but certainly not least, is the fact that while I was waiting to be allowed to do certain things, I got to see what worked and what didn’t through my brothers. By the time I was doing similar things as them, I already had two examples to base my own decisions on. Whether it was taking classes ahead of time to get them out of the way, or applying for my first job at the age of 15, I knew what to do before I had to do it. If that wasn’t already enough, I could always ask them what they would do if they could do it over again before I had to make a decision. Learning from my brothers’ mistakes and successes is two-fold. Not only did I have an advantage over others with no older siblings, but I also learned the importance of being intentional and always thinking toward the future. While some people choose to live their lives day-by-day, I choose to live preparing for the next road sign before I get to it.

While it helps me prepare for those big life changes and challenges that young adults face, I’m not trying to suggest it’s the best way to live. I know that I lose some spontaneity and uncertainty, but I also know that I will be prepared for almost everything. It was, after all, this mindset that forced me to create an emergency fund before graduating college, research which car I would want to buy before I needed to buy it, and many other things. The simple truth is that life will hit you with unexpected challenges and I would much rather be prepared for them than the alternative.

While it’s hard to say that one sibling has it better, I do know that being the youngest gave me several advantages. I’m definitely appreciative of my family and how they have influenced my life – and in many ways, for the better when it comes to money.

Are you the youngest child? Oldest? Middle child? Share how you think it affected your life.