Advantages of a One Car Family

When I got my new job in December of last year, much of my life changed. One of which was the transition from a one-car family to a two-car family. At the time, my wife was driving to work and school in the opposite direction as I would be traveling to my new job. I had long dreamed of having two cars and being able to drive to work, especially in the winter. If you were a reader of my blog way back when, you will remember my pity party when I had to walk 1 mile to and from work in sub-freezing temperatures – WORST THING EVER! In that post, I talked about wanting to buy a 2nd car.

Well, getting this new job would mean we’d have to get a 2nd car. I did some research and bought a 2nd car a week before I started my new job. I made sure not to lock up too much money in a second car because I wanted to keep more money in my emergency fund and keep my money working for me, instead of in a depreciating asset. Remember, older is almost always better when it comes to cars. 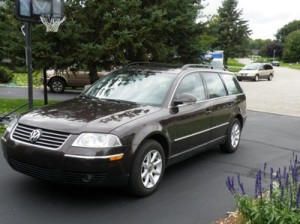 Car # 1, which we’ll be keeping because I love our wagon!

Why I’ve Changed My Mind: One Car Family is Who We Are

While I don’t mind the cool AC in the summer months and the car heater in the most frigid temperatures, I have come to hate having two cars. Not only are we paying higher rent for living closer to town and public transportation (which, doesn’t go to my work, in case you are curious), but we are paying for two cars. Both cars are paid off, but having two cars means the following:

If I really wanted to, I could probably go on and on. While it’s clear that cars cost money and it takes time to care for them, the most important thing to point out is that I have come to realize that luxury is not always a good thing. This is a prime example of ‘The grass is always greener on the other side’.

Coming to these realizations is a big step for me to curb my drive for consumerism even more. I now realize that worrying about who is going to use the car on certain days was a luxury, because of the many benefits that come with it. Now that we have lived with two cars for almost a year, I can happily say that I don’t need two cars. If we are going to continue to live in the northeast, near public transportation, which we are, there’s no reason to have two cars – at least not after the big move coming up – where I will be able to take public transportation to my new office.

Ultimately, our decision to be a one-car family is based on the following reasons:

While I understand that some families may need two cars because of where they live, I also know that there are other options available to you. No one ever HAS to have two cars. And for me personally, I much prefer to live in an area where I can get by with one vehicle. In fact, I’m counting down the days until I can sell our second car. How’s that for ironic?

Are you a one car family? Or two? More? Do you think it’s practical to live with just one car?