How to Stop being a Hoarder

A couple weeks ago, I finally took time to write down my thoughts on why I needed to start cleaning out apartment. We move just 7 months ago, so it’s not like we had THAT much extra stuff, but I came to realize that there were many hidden financial benefits to getting rid of stuff for free. That got me started.

I finally had a reason to start, now it was just a matter of making it happen.

How to Make a Life Change: Start Small

There’s several thins in life that I struggle with, one of which is not making drastic changes when I get motivated. Whenever I decide to start something, I usually jump in with both feet. I don’t test the waters… In an effort to change that behavior and strive for lasting change, I decided to start small.

I started simplifying my life and de-cluttering by finding an empty box and designating it the “Donate Box.” We had room in the closet, so it wasn’t causing any huge inconvenience to leave it there until it was full. I started by putting an old flashlight/lamp that hardly worked anymore. Then, an old cooler that was extremely inconvenient.

Slowly by slowly, there were more items that I found around our apartment that were unnecessary. Not only did I start to evaluate the necessity of these items as I went about my everyday activities, but the box started to fill up. A couple weekends ago, the conversation of getting rid of stuff came up with Mrs. 20s and before we knew it, we were digging through our dressers and closet trying to fill up the box.

While we started slowly, things picked up pace on a Saturday afternoon. Before we knew it, the box was full. 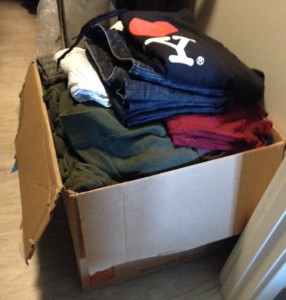 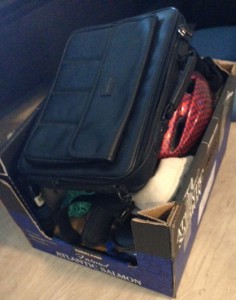 We clearly got excited about our new path to getting rid of stuff that we no longer need, and that’s okay. It expedited some of the progress, and helped us learn important lessons along the way.

What We’ve Learned So Far

While we’ve made a lot of progress and cleaned out some of our stuff, we not done yet. In fact, we will never be done because we are looking for a lifestyle change – not just a one-time quick fix. But, that doesn’t mean we haven’t learned some important lessons already.

There are still a lot of items that we have that serve no purpose. Many items are sitting in a drawer or closet that will stay there until we move – unless we act now. As a reminder, by searching for these useless items and donating them, we are not only cleaning up the apartment, but we are also making small steps to changing our financial future forever – because we will be less likely to buy useless crap if we are targeting it with a sniper rifle.

There are a number of things on my list, some of which I am actually going to try and sell for some spare change. This includes:

I’ll be sure to keep you all updated!

Readers, what changes are you making to simplify?